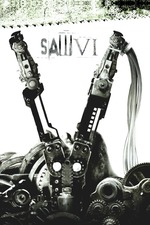 “So I ask you: When faced with death, who will survive? Live or die, William. Make your choice.”

Spooktober watch #6:
THANK YOU, my hope has been restored. better than 3, 4 and 5 and although it’s still the same concept there’s some fresh wind coming through with the direction it took. it’s hard not to spoil any of the previous installments. basically the newer characters have some puzzles to solve and the twist isn’t just sqeezed in as a last minute attempt to lift it above the torture horror that it is but rather has a more extended buildup.

i think they realized that after five movies (srsly wondering how it took them so long) it really wasn’t gonna work anymore if they kept repeating the same pattern so yeah here we have Saw VI that brings you a cast of characters connected in a way that doesn’t make you absolutely hate every single one of them (YAY). still not a big fan of the editing cause all of these movies feel a bit shoved down your throat with the quick cuts and screaming and metal music.

not gonna lie i’ve also gotten rather attached to Hoffman at this point, he’s one of the more complex ones in the series.