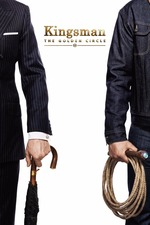 God this was nowhere near as good as the original.

Julianne Moore was wasted in this film. Not like she was //wasted// but that woman is so talented and so powerful she could have helped establish a tremendously threatening villain if the screenplay wasn't so... BAD. The lines were just so cringe-worthy and 80% of the "jokes" fell flat. Also, Elton John's cameo was just... panic attack inducing. He really was irrelevant, terrible and more than embarrassing.

But, onto the good things which include, but are not limited to, Pedro Pascal, Taron Egerton's jawline and the fight scenes. THOSE FIGHT SCENES. I have to give Matthew Vaughn his dues for crafting what are, undoubtedly, some of the best fight scenes in history. He directs in such a stylish manner it almost gives me Guy Ritchie vibes. The choreography in the action scenes made me tear up, it is so fantastically planned and executed. Honestly, if Vaughn had decided to just make a 4 hour long cut of all the fight scenes from this movie and its predecessor, I would have no problem paying my hard earned money to go and see it at least 3 times. The cinematography in this is also stunning and the performances are, for the most part, great - especially from Taron.

Overall, this film isn't exactly bad but it's also not exactly good either. At the end of the day, it's just a bit of harmless fun and I definitely don't regret going to see it. I missed you Colin Firth.