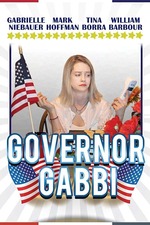 This got dragged in the race to find a new The Room and I can see why of course.
So first of all, The Room had budget for a bunch of semi-professionals on the crew: this one doesn't. It's been shot by an apparent total of four/five people, and it's the type of movie where "cops" show up and it's just two guys in regular black shirts and 80s cop hats. Literally, the budget for the cop costume was just the hats. So you can imagine how they get around portraying the lifestyle of the Governor of California.
Second of all this is supposed to be a "sassy comedy", so you cannot exactly say it's unintentionally funny, rather maybe that it's funny for the wrong reasons – the non-sense plot of course, but also the fact that nobody in here has the slightest grasp of what comedy timing even is.
It's the type of movie where if you feel like shouting "Why???" every time some non-sense happens, you might want to pause or you might miss some. The post-production camera movements, the constant ADR, the jerky cuts, the super-slow and unnatural dialogues. The lack of direction. The lack of ideas – all she does is yoga, hire her friends, dress "unconventionally", say "peeps" and "whassup". She has no agenda apart for raising the salary for teachers and broadly denouncing corruption, so the movie is not really about politics, it's just happy to be a fish-out-of-water scenario as generic as it can be (an example of generic: the stoner character is called "Stoner").
Is it a vanity project then? I'm not sure. It feels like everyone is in this just to be nice and enjoy the experience. Nobody looks like they're trying too hard to impress. Not even the protagonist, which is the weirdest thing.
I feel like I would normally dismiss this as a local/family movie that as such wouldn't deserve real criticism, but it's on Amazon Prime for £7.99, and also apparently got shown on Canadian tv, so they're definitely in the game.