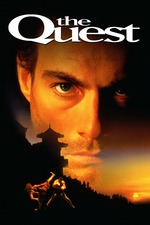 I don't know. It's a thinly disguised Bloodsport remake: it's the same type of tournament, the reluctant hero is running away from something, there's a blonde female journalist, etc... But it has fancy costumes and a way bigger budget. It tries to be an old-fashioned adventure epic, mostly by hoping that having Roger Moore is enough: it never really works, but you feel the sincerity and you can appreciate that this is the type of story that Van Damme wanted to tell. Then it gives up and the last 40 minutes are just fights, with everyone happy to close all the remaining subplots in voice over. So the biggest sin is that, even with all that money, the fights are way less inspired than the ones in Bloodsport. The roster is ok and you get a few good moves here and there, but Jean-Claude himself only does some standard round kicks, no splits, one single helicopter kick, and ends the final fight with an underwhelming uppercut. It feels like this movie should have happened at least a couple of years earlier.

Confessions of an Action Star