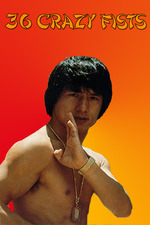 Not bad chopsocky. This bills Jackie Chan as the star, even though Chan is in it for maybe all of 15 seconds. Despite this, it's modestly entertaining, and the dubbing is hilarious, often to the point where it's like a Monty Python sketch.

There's got to be a better print of this somewhere though; the version I saw looked like it was projected from a VHS onto a screen, and then somebody filmed the projection onto another VHS.