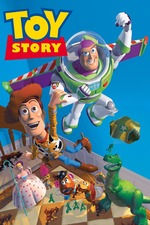 “I've set my laser from stun, to kill.“
“Oh great. If anyone tries to attack us, we can blink em to death.”

Toy Story is my childhood. There’s only one film that’s more nostalgic and defines my youth than Toy Story, and that’s it’s incredible sequel. This is definitely the movie I’ve rewatched the most in my life, as I’ve seen it literally countless times. The story is timeless, the idea of talking toys in ingenious, and the execution is flawless. These characters mean so much to me, but despite the nostalgia this truly is a masterpiece of a film. To this day, Pixar’s first ever is still one of it’s best.