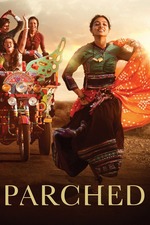 There's not a woman in the world that couldn't relate to the many injustices the women in this film faced! It is a brave and very frank film coming from a woman director Leena Yadav, in a country that treats women as chattel! Films like this restore my faith in humanity and in the future of filmmaking! And yes even in men for I am starting to see a growing trend where men are beginning to stand up for women in general but more importantly doing so out of love and respect for their mothers, wives, daughters, aunties and sisters!

The film was brilliantly executed except for the ending.. but I feel the film is still worthy of your time! The characters were so fleshed out, so real I identified with them and felt their every pain! I wanted to embrace them and in that moment lift their burden from them!

I'm extremely excited by the films coming out of India by women directors as of late! The film I saw prior to this was equally impressive it was Anusha Rizvi's directorial debut.. it was called Peepli Live!

The Bridge on the River Kwai