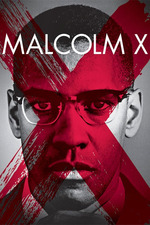 Unlike many other biopics in the history of cinema, Spike Lee's 1992 masterpiece takes measure of every step in the life of a man not to show chapters, or steps, or highlights of his days on this Earth, but to give us an Earthly man, both flawed and gifted, both angry and gracious, both hesitant and brave. The story of Malcolm X as portrayed by Spike Lee is the story of an African American man navigating life, and making mistakes, but always evolving and changing, sometimes for better, and sometimes for worse.
Unlike many other biopics, this bit of moviemaking isn't shy about the gargantuan task posed by the attempt to surmise an entire life into a single film. It isn't shy because Spike Lee took his time to tell the story, giving us ample opportunity to recognize the man beneath the clothes and the glasses, and understand how his choices were shaped by his reality, by his context, and by the many people that came to know him.
In true Spike Lee form, the film isn't shy of controversy. After all, it dedicates over 3 hours of running time to a man with a disputed legacy. Some people may still identify with Malcolm X's early musings on race in America, while many others are critical of it. Some identify with the man he became just before his death, after he had separated from the Muslim Brotherhood and took, what some say, a more collective, peaceful and unifying position regarding the racial problem in America. Lee gives us the many shades of Malcolm to us: the good, the bad, the ugly and the beautiful. As far as traditionally constructed biopics go, I would be hard-pressed to find a more nuanced, poetic and complete one.

PS. Denzel Washington is absolutely fantastic. In an illustrious career filled with great performances, this may be my favorite of his.