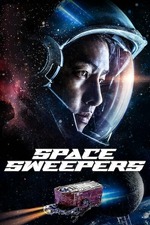 When cinephiles and critics review films and television shows they sometimes forget that most of the entertainment on offer is not made with the intent of satisfying some artistic ideal of great filmmaking, but with the often diminished objective of entertaining audiences.  I’ve always argued that both are valid pursuits, which are not always mutually exclusive, or easy to pull-off. There’s always been value in cinematic escapism, and the pandemic has made that even clearer.

Space Sweepers succeeds at entertaining in the manner that superficial sci-fi thrillers should: it’s paced well, the quality of the special effects doesn’t get in the way of the telling of the story (they’re actually pretty damn good), the world-building is convincing, and the characters that matter (some of the English-speaking characters in the film are downright awful) are written well enough that we unavoidably root for or against them.

If we look with a more critical eye, one could find a plethora of problems with “Space Sweepers”, such as its off-putting English title. However, is this the kind of film the merits such analysis? Can it be enjoyed without getting caught up on the minutia?
There’s definitely enough in this South Korean film to make me nostalgic for the kind of vintage science fiction epics that were fun to watch. Aside from the mega sci-fi franchises that continue to endure (anything that starts with “Star”), the juvenile fun that once dominated science fiction has been lost amidst a plethora of serious, existential and downright depressing sci-fi films.
Space Sweepers is an oddball of fun that blends elements of films like The Fifth Element (one of those not-so-guilty pleasures of mine that is filled with colorful characters in a messy and quasi-dystopian future), and any Terry Gilliam project, with a typical South Korean tale of class warfare.
Sign me up for more films like this.