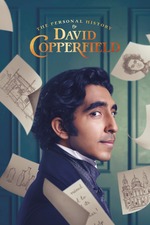 The Personal History of David Copperfield 2019 ★★★

Studios: we look forward to fund your next project. We loved ”Death for Stalin”.
Ianucci: I want to do a novel adaptation of David Copperfield this time.
Studios: but you’ve never done that. Will it be funny?
Ianucci: it’ll be playfully funny. I plan to cast Dev Patel in a sort of reimagining of the story.
Studios: that sounds fun. However, we don’t think that book can be told in one single film. It’ll be very expensive.
Ianucci: It won’t be the cheapest film, but we can save some money and appeal to a larger audience by doing it in 2 hours.
Studios: that’s hard to believe, are you sure you can do that?
Ianucci: no question about it, I’m sure. The film will not be longer than 2 hours.

Despite all of its playfulness, charm and wit, Armando Ianucci’s adaptation of the Charles Dickens novel David Copperfield is an overindulgent and breathless cinematic effort. While there’s plenty to enjoy, especially Dev Patel’s lead performance, there’s no room in the film to take stock, to pause, and to give its characters some sort of narrative heft. The unforgiving pace of the script is made worse by Ianucci’s choice to experiment with different camera shots, often opting for hand-held closeups that are more disorienting than engaging.
There are written stories that are too expansive and complex to be tackled by cinema. Charles Dicken’s David Copperfield may be one of them.