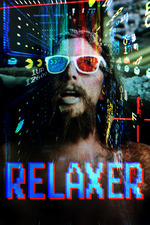 Is it really a sibling rivalry if one has already accepted defeat?

It's another character study from Joel Potrykus, this time of the man-baby variety. So pathetic, our "hero" is, living for a game glitch scam that amounts to nothing - and yet, amounts to everything. He looks like Buster Keaton, but his slapstick routine is one of body horror and grotesqueness. So many gags out of such a specific and small setting. Absolutely endearing, absolutely hilarious, absolutely disgusting, and absolutely a whiff of now by way of then.

Decades have passed since Y2K hysteria, but we'll always have the couch.