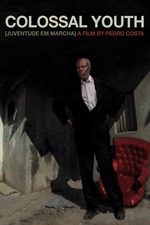 I can't cover everything in a blurb - four years of writing, shooting, editing, repeat - concentrated into a single film means this is going to be a bit dense - not that it's deliberately challenging, there's just a lot, too much to cover.

This is one of those films that reveal its majesty over time - not so much that it necessates re-watches, but me at 20, 21, 24, 25, was not intellectually mature enough to fully catch all its ideas and functions - so I'm lucky that Costa was such a skilled visual stylist that even though I did not know what to think, I knew what to feel. But coming back to this with frankly, a greater understanding of the world, lifts this film to new heights, so much so that I'm uncertain that there's been a better film made than this one since its making.

What I was remiss to realize on my prior viewings of Colossal Youth was that Costa's cinema here is (for all the beautiful images) not a cinema of composition but that of the crosscut. Yet unlike Griffith, this crosscut is not for the purpose of the building and sustaining of tension and momentum, but to function in the manner of an Eisensteinian juxtaposition: shot #1 + shot #2 produce a response or idea that takes the place of the third image, which we do not see. Here, shot #1 is the present - the housing projects where the immigrant-poor inhabitants of Fontainhas has been relocated. Shot #2 takes place thirty years before, in the days leading up to the Carnation Revolution. The invisible third image takes place in those thirty years in-between.

"I did not have faith in democracy," said Costa after making this film. This 'liberation', where few shots were fired, became an even bigger blockade to liberating those who need be liberated most. The shift from fascist dictatorship to liberal democracy provided little to no difference to that of the poor. This motif of juxtaposing 'time' is little more than the traditional construct of cause - effect, except its rare that effect doesn't mean consequence. The world liberalism made where one where to be impoverished meant that you no longer existed. Until the films almost beautiful ending (if it is not beautiful, it is because of how tragic the rest of the film is), the only place Ventura seems comfortable (or of his time?) is inside of the museum.

The purpose of this third image is to chart the progression of liberal revolution to its logical conclusion: eradication of the poor, and eradication of immigrants, all the while championing their cause. Via this structural construct, we do not need to see the play-by-play charting of how this progression takes place, a la Fincher or Diaz: to see the past and the future at once let us know all we need about what went wrong in the present.

Ventura's love letters to his wife go unanswered: perhaps she has rejected him, moved on from him, or perhaps she never even received them. But he always repeats the letter over and over, asks Lento to memorize it - like the dreams they held before the revolution, these are the hopes of the past. And to see Ventura stop Lento from doodling on the table so the record can't skip - the words "Shout, O Liberated people!", from a song of the revolution itself, only holds an ironic tone.

But this film also works because of the sensuality and tonalities of Costa's images, always beautiful and expressive - one wonders if he only made Horse Money because he wanted people to notice how great of a visual stylist he was, finding colours that Murnau only could have dreamed of in the most impoverished of neighbourhoods. But the sense of a poetic realism also works because of how Costa does incorporate mere 'filmed reality' into this film - particularly all the sequences with Vanda, which are the least controlled moments in the film, as though Costa merely set up the camera and let her do all the talking. Costa: "There is more documentary, so to speak, in Colossal Youth than in In Vanda's Room." This dynamic works astonishingly well with the almost operatic grandeur of the 'flashback' scenes with Lento - that this history shows us what created the reality of the now.

There's so much more to go on about for this film - the spaces of the housing projects themselves for example, which initially seem as though pulled out of an Antonioni film - but unlike that director, there is history, and the history we see gives the disparate, cubist spaces of the housing projects a political magnitude that most films rarely even seem to even aspire to. But there's so much here that is so difficult to put into words, also because of this magnitude. The housing projects are insufficient for the radical dreams of the past. Even the letter Ventura repeats over and over essentially puts it into writing, or rather, the conversations with Lento: Lento is always coming back from work, ends up dying at work, is always speaking about work. After the liberal revolution, Ventura and Lento are the ones who build the churches, the libraries, the museums, the banks, the schools. Yet by age 50, most of Ventura's friends are dead or in housing projects. One had hopes and dreams, and they were defeated by the people who saw that they could exploit them.

We went from bad, to even worse. Costa is also a hero for never showing the work itself - he aestheticizes the life in-between, not the act of working: because a working-class utopia is still a part of capitalism. Communism is without class. This viewing actually reminded me of Garrel's Regular Lovers, and I would say that Costa succeeded where Garrel failed.

To see the end credits of this film is doubly powerful: we see non-actors credited as though we were actors. And to see these names on screen is to be reminded of the reality that they lived through. I was going to say they are the victims of an inhumane social system called capitalism, but they are really the survivors.