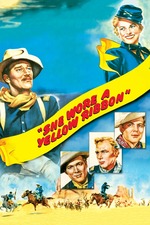 She Wore a Yellow Ribbon

Initially this is disappointing following Fort Apache, lacking its Brechtian approach and near rejection of American mythology. But this is something else - almost the complete opposite. Big themes are replaced with minuscule, virtually nothing happens in this movie - though there are still grace notes galore: Wayne speaking to his wife's grave are among the best things Ford ever filmed. But oddly enough this seems the closest Ford ever came to full Wagnerian spectacle - all the more fascinating because of its tiny trajectory. But while this lacks the complexity of most of the post-'48 films, just because Ford isn't engaging in de-mythologizing doesn't necessarily mean he's still mythologizing a la the 1939 films. This almost seems to be a sort of 'day-in-the-life' type film of what it's like to be in the military - the film really has no plot to speak of, and is essentially a set of military maneuvers constructed as a narrative - which is slightly amusing considering this is one of the more popular Ford films these days. But then, Nathan Brittles end-game is to prevent war!

But this is still later Ford, so even if this doesn't go all the way there's still a tinge of melancholy. The war is successfully prevented - now I've heard this war in particular is more complex than the film lays out - but I take this as I take many of the later Fords, and while this is lacking the nuance of the others, this plays well with Expendable and Clementine as a film made looking for hope after experiencing war - less about the politics of the given moment and it's repercussions in the contemporary ala Apache but the need to rest ones head, the desire for peace. So then "She Wore A Yellow Ribbon," does resemble the pre-war films in that it is a bit of a fantasy. But the title itself still holds melancholy - a paen to lost ideals.

Still - what an odd movie! Military maneuvers to STOP war! What is Ford's level, exactly???

Spring in a Small Town