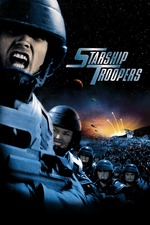 "This year we explored the failure of democracy, where the social scientists brought our world to the brink of chaos. We talked about the veterans, how they took control & imposed the stability which has lasted for generations since.."

Verhoeven actually has precious little to say about fascism which we don't already know (at least in the context of 2017) - but even moreso than the advertisements which resemble propaganda of both Republican and Democrat alike, what remains interesting is the dime-store teen angst plot devices, which in their generic qualities reveal to us the propagandistic nature of these devices themselves. More than a film about fascism, it remains relevant because it's a film about the nature of propaganda, media & spectacle. It's not just that the devices & compositions of this film are based on Third Reich representational mechanics, but rather that these mechanics do not change when we re-purpose them across nations. Not quite as perfect of a work like Verhoeven's grand masterpiece, Showgirls, nor as direct & confrontational as Elle, but this remains brilliant because of how well its subversive aspects are incorporated into the films form - or rather that the films formal aspects are what is being subverted: termite art at its finest!

I admit - I was bored as hell within the films first third (if I want teen drama I can just watch The O.C. ffs) but as soon as the film entered its war section I realized how the two connected - or rather how the two being in connection can only be part of a conscious design towards a thesis, not a traditional movement of plot, or theme within plot. Because Verhoeven's thesis (so to speak) is to demonstrate how media & propaganda are inseparable entities. Also, this must have really been something else to see in 1997, being that the VFX had not dated. Because they play a very special role in this film - this was 'state of the art' CGI back in '97! And under the circumstances of the films thematic design and consequences, the VFX take on the same implications of the media/propaganda ones, bringing this inquiry to spectacle at large as well. Without the perhaps, cheapness that we see now, this visual and thematic linkage must have been to astonishing to those able to make the links themselves. (I'm looking at you, Jacques!)

One gets the sense that Verhoeven took this god-awful script and flipped it without changing a word, but the one moment which seems of PV's own devising is the narrative's opening quote (at the top of this page) - when we often talk of democracies collapse we presume tyrants take their place - and they always do, because democracy in its modern form is merely a stepping stone to a dictatorship. But look at how the sentence ends: "imposed the stability which has lasted since generations since." We do not always realize we are living in an empire.

Verhoeven's American work is going to go down in history as one of the major auteurist runs - he proved to us that it is still possible to make political art within the marketplace.