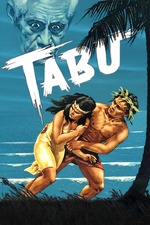 Whereupon Murnau ceases speaking the language of dreams, & masters the language of cinema for us all.......another one of these final works where by some mysterious series of coincidences the director strips down their formal sensibilities to the most essential parts. No lighting, shadows of grass yes - but it is mostly bodies in composition. Bodies always posing, expressing.

At the same time, it is Murnau's most fatalistic work - therefore his most philosophical. Aquarium meets aquarium - like this film is set in the middle of time, where one social system collides with another.
It is fatalistic because the lovers are doomed from the start - infact
Murnau can be seen as postulating that love can only authentically survive **outside** of systems. This is a film of two polar opposite extremes - overpowering romanticism and harrowing despair. But Murnau is also a mystic, an occultist - like Tourneur & Dreyer, he finds reality in superstition. For Murnau, for his lovers, the Tabu is real. The lovers escape into a Western Civilization and discover money instead of Gods - 'but the moon still spreads its path across the sea,' and in the inescapabilty of the old gods, Murnau's thoughts and feelings are revealed - that cycles and systems are impossible to escape, and history is doomed to repeat itself forever. Something I appreciate about this film is that Murnau sets up exoticism, but for the purpose of forgoing it. Rather than set up exoticism as a through-line for abstraction, a la Sternberg, Murnau gives us the coming of the ships a mere 10 minutes into the film - and through his we can see the Tahitian systems - far from the naivety of "Western Civilization is the true evil, so on," Murnau is far more aware - each culture has its own laws, rules, politics, problems.

The movies final ten minutes, which are unbearably tragic - because of their inevitability. The glitter of moonlight over the water is unforgettable - so beautiful it's ironic, so beautiful it's surreal, occultist.

A true profound work which can barely be written about, because the experience is so wholly cinematic. Defiant fatalism, unapologetic doom. But authentic love.