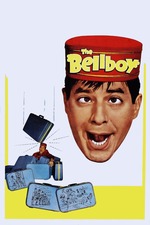 I still feel so surprised seeing the logo of a major studio following the conclusion of this film! This has to be one of the most inventive directorial debuts within the Hollywood cinema - it's fascinating that so much of the humor is from the fact that Stanley is literately incapable of doing anything, as this allows for Lewis the filmmaker to find solutions within his formal design. Which of course, are often non-solutions. It's a purity in invention, and by rejection of narrative Lewis finds himself in a position where he can construct a structure of his own motifs, wholly on his own terms. There is in-fact a narrative here, but it rejects the traditional idea of story for a succession of gags. Lewis crafts a cinema-world completely outside of the reality we know - a totality in auteurism.

It was said that throughout the 50s that when Lewis had off-time he would spend it getting to know the crews of the films he starred in, gradually amassing techniques from as many aspects of the film-making process as he could. There feels so much of that combined into this work (again, the lack on emphasis on traditional narrative constructs for an emphasis on technique instead) but also perhaps through these "crew hangouts", Lewis places a focus on the workers of the establishment which is being run - resulting in a couple of odd little sequences where we follow the rest of the bellboys out on their lunch breaks and leisure time. There's a number of interesting things here also which Lewis will develop thematically over his time as a filmmaker (but just glimpses - Lewis at this point couldn't care less even about a single through-line!) primarily on the focus on subservience and accepted subservience - the reason Stanley never speaks is because he never gets a chance to! If he opens his mouth he's interrupted - often to be given an order, to be talked down too, or to be lectured. Lewis in this film seems to develop his ideas in this work from moving to broad parody of accepted tropes, to using his formal skill to invent new tropes themselves. Still, even though the parody continues, there is a touch of pathos to when Stanley can't even get a seat at a table in the diner of his own place of work for his lunch break.

Withstanding the famous music conducting sequence, the most striking moment comes when Jerry Lewis, also playing himself, comes to visit the Hotel, supposedly littered with celebrities. Again parodying tropes of the "stressed out, famous movie star" who needs a break, this continues when Milton Berle is also revealed to be residing at the hotel. Followed by the revelation that Milton Berle also plays another Bellboy! Precluded by Stanley accidentally giving the message to a poster of Milton Berle, the 'real' Berle turns out to be the aforementioned lecturer before the revelation of Berle the worker. There's a brief moment of pause - Stanley and worker Berle stand together and being that the 'real' Berle was just another authority figure, we (if just for a second) meditate on how differently two people with the same face can be treated when in different ranks of social position.

As for the music sequence, here's a little something I cooked up a few years back: nbahadur.tumblr.com/post/89355687004/the-bellboy-jerry-lewis-1960-the-decameron

Addendum: "I think for Lewis its humor, so humor doesn't need cinephilia. It needs form to make the joke work. Thats it. What can cinephilia tell you about how to laugh" - Isiah Medina