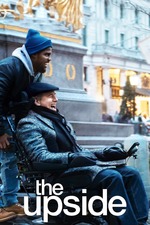 An unnecessary remake for sure of a movie that was flawed but won everyone over with it’s immense charm and likability. There is nothing wrong inherently wrong or insulting about The Upside other than the fact that it exists.

The Intouchables was a cultural event to say the least when it was released in 2011 and was met with positive reviews and became the second highest grossing film ever made in France. So naturally an avalanche of remakes and reiterations of this story came to happen. We already have Spanish and Tamil versions of this story with a Bollywood adaptation still in development. And so it was obvious that Hollywood would eventually get their hands on this film.

And truth be told I still had fun watching it even though I am convinced that it is mostly due to the likable nature of it’s source material. If you haven’t watched the original then you will enjoy The Upside though I sincerely hope that you give the former a chance.

The cast is solid. Bryan Cranston can never do wrong not matter what film he’s in. I was also very impressed with Kevin Hart. While Omar Sy’s portrayal was much more charismatic and fused with energy, I honestly bought Hart more as this down on his luck bum. In fact I might just prefer him. Nicole Kidman is also another standout. She is excellent in this movie and probably the best improvement that the filmmakers accomplished when you compare it to the original.

There were several narrative beats and plot lines from the original that gets changed or jumbled around which was another to be expected from a remake. While I was alright with some of them, certain changes just didn’t sit right with me. The original was a movie that carefully had it’s story structured in such a way that any deviation from it would expose the flaws of the story. Which is something that The Upside and even all it’s iterations suffer from.

The Upside is enjoyable especially for those who haven’t seen the original. It packs a solid cast and a familiar storyline and it doesn't do anything horrendous or appalling that would insult it's audience.