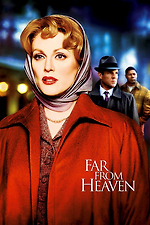 Carol was a film I appreciated, but couldn't love. It only took one other film from Todd Haynes for me to fall head over heels for him.

Granted, I haven't seen a single film by Douglas Sirk, so maybe my opinion on Far from Heaven will change for the worse, but for now, allow me to praise this film as one of the greatest dramas I have ever seen. The script and cinematography flow like melted butter; the performances are real and tear-jerking (Julianne Moore MY GOODNESS!! I haven't seen The Hours yet but I cannot believe any performance of 2002 could top hers in this film); the costume design is gorgeous and authentic; the color contrasts in this movie (blue, in this case, is the coldest color) give it a hint of fantasy, which works perfectly despite the grounded plot.

I'd like to make special note of the soundtrack, which elevates the film in awe-inspiring ways. One of the elements that constantly took me out of Carol was Carter Burwell's score sounding like a half-assed Philip Glass imitation. It did not blend with the time period of the movie and made everything too murky. Far from Heaven's score, on the other hand succeeds because it is sweeping, colorful, intimate and emotional, plus it blends with the time period perfectly.

This movie is a miracle, because it is a 2002 film that feels completely and authentically like it was made in the '70s or '80s (a la Ordinary People, except Ordinary People sucks). It is moving, wistful, and melodramatic, but never cheesy. Watch it if you want to be moved to tears by genuine characters.

And obviously Julianne Moore is my favorite actress now. I have been converted to Moore-ism.