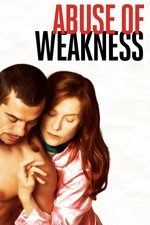 Catherine Breillat is among my favorite female French auteurs due to her bravery in the face of adversity. Abuse of Weakness (2013) is one of her boldest pseudo-bio pics that she has directed. The true criminal Christophe Rocancourt stole over 800,000 euros from Breillat after a cerebral hemorrhage that left her body disabled for years. She went through countless hours of physical therapy, occupational therapy, and speech therapy to name a few. There are predators everywhere but, the lowest of low prey on those who have suffered an illness such as a stroke, heart attack, or are permanently disabled. My mother had a stroke years ago and she was admitted into the Patricia Neal Stroke Center who nursed her back to health over a period of 8 months.

In Breillat’s situation, she used this situation to assemble a screenplay (Abuse of Weakness) loosely based on her actual case. Most celebrities would do their best to hide a story of embarrassment such as this but, Breillat used this most difficult of scenarios to expose the predator and the ease of being used, abused, and stolen from. Even if one is not aware of Breillat as an auteur, artist, and author, this is still a powerful film. She chose the most brave of French actresses, in my opinion, Isabelle Huppert to portray herself (Catherine Breillat as Maud). Huppert soldiers through this as she does in Elle where she is serially raped, Special Treatment where she is a sex worker who is regularly abused and almost killed, and The Piano Teacher where she is a masochist teacher living with her mother. Huppert has portrayed the most incredible roles with zero Oscar nominations. Oh well, Oscars are not everything. Most of my favorite actors are not recognized by the Academy. Abuse of Weakness is a film we saw opening night many years ago but, its power is still just as potent.