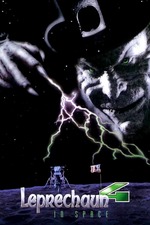 ‘According to Dave Tripet, the executive in charge of production for the first three movies, this film originally started out as a spoof of Apollo 13 (1995). A senior Trimark executive saw the promo art for Apollo 13 and immediately had artwork made up replacing Tom Hanks's face on the poster with the Leprechaun's face, and this is what started the script work for the movie. The title character is never once in the film referred to as a Leprechaun. He is only called "alien," "monster," "bastard," or some combination thereof.’

Adheres to the ‘4th one in space’ rule.

The more you know.