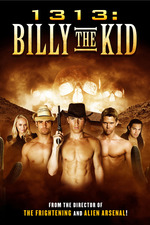 This sepia tone shitpile is by far the best of the 1313 series I've seen simply because of how ridiculous and horrible it is. However, it is the first of these movies I've seen with an interesting plot. It's a batshit insane plot but it's better than nothing.

DeCoteau traded in the tighty whiteys for some long johns this time around. The movie is set in 1881 in a small town in the wild west...not his Malibu Mansion. That would have been as historically inaccurate as a general store with a light fixture hanging from the ceiling and a few light switches on the walls...oh well it's a 1313 movie...it was never going to be perfect.

Billy the Kid is one of the hotter guys in the series so far and my favorite boy from Cougar Cult shows back up as Lloyd, the horse guy.

The acting is as bad as it always is except it's actually worse because they are trying to speak in the 1800's vernacular and they just aren't capable of it.

There's also a supernatural man eating force living in the woods. I'm going to let that soak in. Once it does you can try to tell me this movie isn't something that needs to be seen to be believed.

It's amazing what happens when you remove the 45 minutes of pool/shower/sleeping chest rubbing scenes and replace it with some story.

Manos: The Hands of Fate