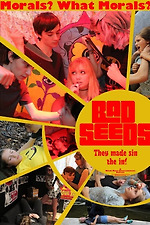 Alex DiSanto gives me hope for the future. Here's a teenager so fluent in (s)exploitation that he made a movie for literally no money (movies that people call "no-budget" and "z-grade" still have budgets of at least a few grand) that truly feels at home in the 60's sexploitation world without any actual sex or nudity. That's amazing.

Seriously though, lots of people are out there making throwback movies and I generally don't like them. They tend to exaggerate the cliches of Gialli, 80's flicks, 70's horror, etc but they wouldn't feel at home sandwiched between two actual examples of what they're "homaging". This movie, MADE BY A TEENAGER, accomplishes that task better than ADULTS WITH MONEY.

I'm 100% obsessed with Alex and all the young women he surrounds himself with because they're all amazing and they make such wonderful movies. They have a very obvious chemistry and they interact so naturally. Even the worst actor of the bunch is still great in the grand scheme of the movie. On top of all that, this movie works in the way that Mike Diana's movies work in that it's fun to watch kids be horrible: Kill, do drugs, talk all sorts of shit, etc.

Honestly, all you trash enthusiasts that aren't already hip to Alex's movies, get hip because he should be on everyone's radar. I've never been more excited for an idea of a movie than I am for a movie Alex makes as an adult when he can really just go balls to the wall and do whatever he wants.

A Christmas to Dismember