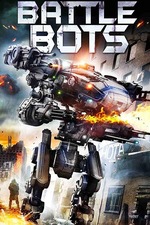 Battle Bots will always be super special to me because it was my first movie as an actor which just so happened to be directed by one of my favorite directors of all time. The last year or two of my life has been a wild ride and I’ve honestly never been happier. I’ve met a lot of really interesting people and become friends with many people whose work I really admire, one of them obviously being Mark Polonia.

I first met Mark in Austin, Texas because, like a crazy person, I decided to fly down for the night to hang out with Hollie Horror, Evan, and Patrick and catch the Polonia Powa! double feature at the Alamo Drafthouse. We had fancy ramen, drank a little, saw Church of the Damned and Feeders on the big screen and listened to Mark talk about the movies. Then the whole place cleared out and Patrick and I and one other person stuck around to talk to and get a picture with Mark Polonia. He signed our Hallucinations tapes and then when he found out I flew down from New Jersey just for the screening he told me to write down my phone number for him because he was going to put me in a movie. I went out drinking with Patrick and Evan that night still completely dumbfounded by how nice of a guy Mark was and that Mark Polonia now had my phone number.

The next morning, I landed back in NJ and I got a phone call from an unknown Pennsylvania number and it was Mark telling me he was serious about putting me in a movie. He couldn’t believe someone would actually go to such lengths just to meet him. We talked on and off for a while but our schedules didn’t really match up so I unfortunately didn’t end up in Alien Surveillance. Then VHS Fest II came around at the Mahoning Drive-In out in Pennsylvania and they were screening Splatter Farm and Mark was going to be there. We hung out and caught up and he told a few stories and then later that week I got a text telling me he had a part for me in his next movie called Battle Bots. He said it was a small role, not a lot of lines so I expected to be in a few scenes, say a couple lines and then be done. Then he sent me the script and I was one of the main characters with a fair amount of screen time. I was excited and terrified.

One of the first things Mark asked me when he called me that first time was whether or not I could act. I said no. His answer was, “Whatever. That doesn’t really matter. You’ve seen my movies.” Now he’s giving me a decent sized part in a movie that I may or may not ruin. I tried as hard as I could to memorize the lines, come up with a voice, and hope for the best. Next thing I knew I was pulling up to Mark Polonia’s house where I was going to be staying for the weekend while we shot the movie.

We made this movie in two days with two locations plus some inserts. We moved crazy fast but it was also way more relaxed than I expected. Mark is exactly as cool and calm and friendly during filming as he is any other time. It was exhausting but it was a lot of fun. I got to watch a Polonia Bros. Entertainment movie get made. And I was in it as Squirrel, the creepy robot mechanic with 3 faces. And one of the unexplained apes in the background. And as the voice for some of the robots. Because when you cast and crew is a total of 7 people, you pick up the slack wherever it’s needed.

We shot the movie last month and it became available on Amazon Prime today but I watched it at Mark’s house this past weekend because I was back out there filming another movie. I don’t know if I’m allowed to talk about it yet but it’s a shark movie and I’m really excited to see it. When I showed up on Friday night I asked him what the deal was and he said he didn’t know when it would show up on Prime but we could watch it if I wanted so he loaded it up on his laptop and I sat and watched my screen debut with Mark and I didn’t hate my performance and I didn’t hate watching myself like I thought I would. It’s a cheap sci-fi movie and it’s fun and I’m in it so I’m not really capable of being objective but I think it’s fucking great and you should all watch it right now!