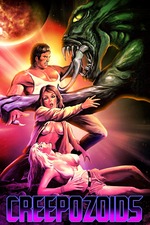 Good is a relative term...you may not agree with me that this movie is actually good. You might be right...but that's an argument for a different day.

What we have here is a post-apocalyptic future (1998...) during some world war or something...it's not really explained all too well but there's crazy acid rain that forces our group of desserters and draft dodgers into some underground bunker where the entire movie takes place.

Before I go any further I wanted to mention that even though I liked this movie I couldn't help but think there was a more interesting movie happening outside the bunker. Between the front lines of whatever war it is and the civillians surviving in the so called "barren wastelands" the world has become and other people who fled the military I'm sure there's a lot of interesting shit happening outside.

Meanwhile, inside there are three typical DeCoteau style handsome men with two ladies, one of them being the wonderful Linnea Quigley. There's also a giant monster that picks them off one by one.

There's not much more to it than that but it's a fun ride.