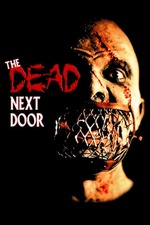 The Dead Next Door

I am constantly reminded how lucky I am to live where I live. I'm fairly close to the Exhumed Films screenings in Philly, a doable drive to the Mahoning Drive In Theater, and within driving distance of pretty much anything cool happening in New Jersey. Then there's everything that happens in NYC. This weekend my friends over at Horror Boobs and Saturn's Core teamed up for Tempe Apocalypse. 3 movies, 4 screenings, 4 days. Day 1 was at the Nitehawk in Brooklyn and I had the pleasure of watching the new 2k restoration of The Dead Next Door on the big screen while sitting right next to the man himself, J.R. Bookwalter. I have to admit, the screening was 9:30 on a weekday night and I was afraid I was going to nod off. Terrified actually. I really didn't want to fall asleep sitting right next to J.R. Luckily, a mixture of the truffle oil popcorn and HOW AMAZINGLY BEAUTIFUL this new scan looks kept me not only awake but absolutely riveted.

This movie was my introduction into the world of J.R. Bookwalter and what I got most out of the movie the first time was the scope of the production. It was obvious that it was a passion project. It was obvious that Bookwalter loved horror movies (Romero movies, specifically). The time and effort that went into making this movie shines in EVERY scene.

J.R. said last night that he wasn't out to make an "ambitious movie" he was just young and never took no for an answer but I can't think of a better word for the finished product than "ambitious". The effects and the makeup go for broke in every single way. The cheapest looking makeup job in the movie (to my eyes at least) was Bill Morrison's latex zombie-face makeup when he's laying on the table and even that looks great, it's just that the edges are blended perfectly. The fake heads are all fantastic, the blood and guts are great, and all the dismemberment and intestinal shit looks so fucking good.

I don't know if it's the way my perception has shifted after 5 years and who knows how many low budget movies I've watched but I remember thinking this movie dragged in the middle and for the life of me I can't figure out why I would have ever thought that. I really just loved EVERYTHING about it last night.

My favorite memory of this movie from now on will be leaning over to Bookwalter after his first scene was done and telling him he shoulda been a star. Then towards the end of the movie right as he take a shotgun blast to the chest he leaned over to me and said "best scene in the movie."