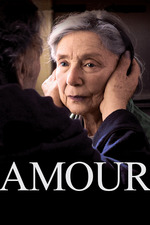 After the credits rolled, I just say quietly, completely and utterly emotionally drained.

Michael Haneke wrote and directed this tastefully-done film, which closely examines the effects a stroke has on its victim and her family. The opening scene seems to be Mr. Haneke announcing his intentions and saying to the viewer, "There will be no silly happy ending here."

The film then truly begins, and we see a lively, active elderly couple enjoying a night on the town, as they attend a piano recital in a theater. We see that they are still happily married, via their joyful interactions with one another. One night, as they couple are in bed together, we see the husband Georges awaken and look over to his wife Anne. The camera pans to her side of the bed, revealing that she is sitting upright in bed, in the dark, quietly staring at nothing in particular. The following day, the couple are enjoying breakfast together and suddenly she stops taking part in the conversation. When he notices her lack of participation, he examines her more closely and continues to prompt her to respond. Silence. "Anne, what's wrong?" Silence. "Anne?..." Still no response. He takes a dishcloth and runs it under the kitchen tap, which he leaves running. He applies the damp cloth to her forehead and neck, but still no response. Georges becomes alarmed and goes to the bedroom to get dressed, in order to seek some help. While getting dressed, the kitchen tap stops running. He goes back to the kitchen, at which point she gently scolds him for leaving the water running. He explains the events, to which she is incredulous. She begins to pour herself some tea, and only after she spills the tea, she realizes something is wrong when she is unable to lift her arm.

We see couple returning from the hospital, being wheeled into their apartment in a wheelchair. She is paralyzed down the right side of her body.

As the film progresses, we see how the couple, as well as friends other family members, react to the situation. Anne forces George to promise never to take her back to the hospital. Their adult daughter Eva (Isabelle Huppert) wonders why dad doesn't put mom into a home. The friendly caretaker and his wife are sympathetic and repeatedly offer to assist however they can. Georges' and Anne's relationship becomes slightly strained, but still loving, as she feels she is a burden to Georges. He claims she is not.

Her condition worsens then she suffers yet another stroke, at which point she can now barely speak. We see Georges slowly lose his ability to behave rationally.

To reiterate what I said above: Ugh.

This film was especially difficult for me since I have two family members who suffered one or more strokes. Thankfully none as serious as Anne's, but difficult nonetheless. My father, who suffered multiple "small" strokes, can still get about and has most motor function, but since the strokes, he's no longer really living. He's merely alive. It's been tough to see him as a zombie-like shell of his former self.

I thought this film did an excellent job at portraying different perspectives of the affected parties. The daughter is the person who can't understand why her father assumes the burden for himself, rather than sending her to a professional facility. The husband is thankful she is still alive (my perspective towards my family). Anne thinks she's just a burden and doesn't have the will to live, since she feels she'll just be a burden.

I especially thought Anne's perspective was handled sensitively. It's easy for the friends and family to claim the sufferer is lucky to be alive, but is the stroke victim really so "lucky" after all?