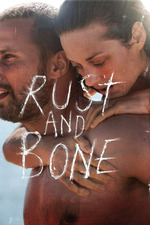 Ms. Cotillard plays Stéphanie, a beautiful young woman who works as a whale trainer at a marina. Matthias Schoenaerts plays Ali, a broke man with a young son who is is apparently leaving behind an unhappy past. Ali has a violent side, but ultimately has a tender side, and is a loving father to his son.

Stéphanie and Ali meet one night at a club where he works as a bouncer, when he breaks up a fight in which Stéphanie has been injured. He drives her home, and leaves leaves shortly thereafter, at the request of Stéphanie's boyfriend.

Shortly thereafter, Stéphanie suffers a devastating accident during a whale show, at which point she loses both of her legs. Months later, she feels compelled to call Ali, who she hasn't seen since their initial meeting. The two form eventually form an unlikely bond, and Stéphanie begins to regain her self-confidence.

This was an emotional roller coaster of a film, with excellent performances from the two leads. This was my third time seeing Marion Cotillard in a starring role, and each time I see her, I love her more.