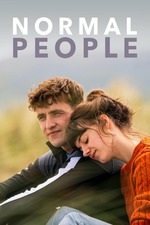 I had no fucking clue this was on Letterboxd. But oh my god. I have never felt so represented on screen before with Connell. The shyness, the anxiety, the quietness in not saying much with friends, not feeling like you fit in anywhere even though you have multiple groups of mates, that feeling of love that is just so moving and captivating that you can't explain. The scene after the debs, I related.

I don't know if it's just because I am Irish and I can relate to everything in here especially with the authenticity of Irish culture but I just adored every moment of this show. I have never seen acting feel soooo natural. Every moment with just Connell and Marianne, I felt I was disrupting the intimacy. The "Irish mammy" is perfect, Jamie being an absolute D4 pretentious geebag is perfect, Niall being an absolute sound fecker is perfect. The fact that both characters have flaws that can batter them up and make them feel like idiots doesn't disrupt their connection and endearment for one- another. One moment in particular that stands out, the first sexual scene that contains consent. It sets up the overall tone and themes that will occur throughout the show and in particular near the last 2 episodes. It needed to be shown, it needed to be explained and needed to be an important issue that was properly brought up, it's a small, subtle effective component of a fantastic and honest series.

I can't really explain the adoration I have for this show, every slow,awkward, long scene filled with a lack of communication and dialogue manages to convey so much. The music accompanies every building moment of longing, love and life so beautifully. I wish I could have the vocabulary and intelligence to bring out all the wondrous, indescribable feelings about this beautifully complex, hurtful, loving,real, emotionally breathtaking sequence of two characters who are rich in detail and full of love. The approach and execution is exceptional and the realism is captured so well.

Lenny Abrahamson, Paul Mescal, Daisy Edgar Jones and each cast and crew member deserve everything. One of the best things I have ever watched.
Edit: Fook, I forgot to mention Hattie Mcdonald also, the emotion that was gained wouldn't be accomplished without her effortless direction.