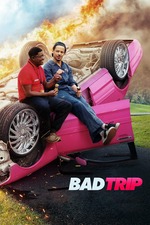 Bad Trip is an uneven experience, with unfortunately more misses than hits. It's inevitable to compare this one to Sasha Baron Cohen movies due to their similar premises, and this one, despite its fair share of genuinely hilarious moments, ultimately lacks boundary-pushing properties to bring its mostly juvenile, one-dimensional gags to the next level.

Eric Andre and Lil Rel Howery played the two best friends who go on a trip to New York, while pranking people they meet along the way. With the majority of the pranks being over-recycled, it really comes down to the personal charms of Andre and Lil Rel Howery, as well as the real life reactions for this premise to take off. Andre was simply a firecracker in this one, providing most of the gags with visible dedications and courage, despite scarce moments of massive cringe. Lil Rel Howery wasn't provided much of a spotlight to shine due to the type of comic that he is, but overall he executed the role of a sidekick decently. The cameo of Tiffany Haddish was actually much more scene-stealing than I've expected, as we witness the transformative, almost too realistic portrait of an innate who breaks out of jail for revenge.

With a witty placement of skits, where the best two are put at two ends of the runtime, Bad Trip is overall decent enough to pass some 90 minutes with some good laughs, but it's simply not by any means groundbreaking.