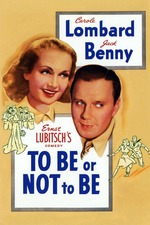 It’s hard to imagine how I might have felt about this movie if I had seen it when it was released in 1942. The balance of comedy and tragedy isn’t as effective or profound as other satires of the era like The Great Dictator, and some of its attempts at both humor and drama fall a bit flat. I kept thinking about real people who actually had to carry out elaborate schemes – and often died in the process – when working against the nazis. This movie definitely sugar coats the whole thing as a kind of overly fun and zany situation, but sometimes comedy that’s “too soon” is a powerful way to make people look a dark situation in the face – whether it’s realistic and tasteful or not.

The movie also comes across as very self aware in that regard, which ultimately helps its message. It satirizes ego, vanity, and celebrity in wartime just as much as it satirizes fascism.

With all that said, watching a movie about the start of a war isn’t going to help me sleep any easier with the current events as they are in the world.