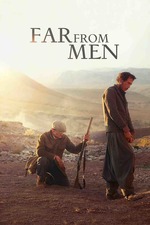 Viggo Mortensen gives one of his best performances as an ex-French Army soldier who gets caught in the crossfire of the Algerian War. Born in Algeria but Spanish by lineage, he plays a man out of time and place, perceived as alien by both locals and colonizers alike. So when he reluctantly decides to escort a dissident (Reda Kateb from A Prophet), to a regional police station, a series of incidents and revelations force the question of where his loyalties lie.

Easily features some of the most impressive widescreen vistas in ages (the Atlas Mountains are captured splendidly) accompanied by a superb, original score from Nick Cave and Warren Ellis. Mortensen owns in all intense, gunslinging action sequences as well.

The film probably could've been a bit more expressive on the inner-lives of both men (part of it does feel like a walk amongst the desert), but by the end, I certainly cared about the understanding these two had created, where they'd go afterwards, and what was torn during this war. Gerry meets Unforgiven, I guess.