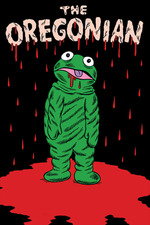 I don't know if "The Oregonian" is well known in indie circles, but it is probably and regrettably unknown to the mainstream public at large, probably even to most genre picture fiends like me. Only 350 people have rated it on IMDB (April, 2013) and the average score there is shamefully low: 3,5. For shame people! I know that IMDB ratings are not "scientific" as measures of a movie's popularity or notoriety but they give a fairly good indication of a movie's general familiarity.

This is an unheralded masterpiece that came and went sadly enough and is as anonymous as any other surreal experimental film. But I imagine the director Calvin Reeder not expecting to get rave reviews anytime soon. Sure, like many reviewers point out here on Letterboxd you can make reasonable comparisons between "The Oregonian" and the works of Brakhage and Lynch but Reeder still manages to chisel out a movie that is perhaps better described as a surreal essay with its own artistic merits.

"The Oregonian" is decidedly unconventional, impressionistic (I'm using the more apt literary term here) and drenched with unpleasant, buzzing and squeaking sounds and unsettling, hypnotic visuals. In other words: elements that are perhaps not uncommon in art-films but rarely utilized in horror movies. "The Oregonian" doesn't shy away from being inaccessible and bewildering. I must admit though that the lo-fi soundtrack greatly explains my affection for this weird little movie. I just love the music.

It's hard to summarize this movie plot-wise but a woman is introduced early on that presumably has been the victim of a horrible car accident. (I'm recounting this from memory) The woman that I suppose is the titular Oregonian staggers out of her demolished car with a large wound on her forehead. She sees two bodies lying on the ground, in front of the wrecked car giving indication that she might be responsible for the accident. Moving further into the isolated landscape she finds herself in she encounters a bizarre old lady, all sorts of menacing individuals and a man dressed in a furry green monster costume. Yes I know, this all sounds ridiculous but it works.

"The Oregonian" is a visceral experience and words can't really give it justice, even the genre description "horror" is reductive. I sincerely hope that director Calvin Reeder keeps making films.