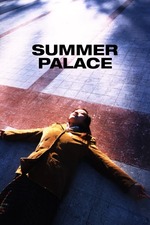 i'll admit, this was an extremely frustrating watch for me.

i liked that lou ye approached the (taboo) topic of the tiananmen square student protests kind of both head-on, but also obliquely. his frantic camera and editing conveys the sheer chaos of the student protests - the scenes really disorient you as a spectator, simulating what it must have felt like to be part of the crowd scrambling to get away from the military opening fire on students. it also seems like there was a part of the film utilising archival footage of the student protests, which made me sit up and go, "oh shit, this is Real, this really did happen." this year, 2019, marks the 30th anniversary of the 1989 june 4 incident.

the crazy irony of the student-led tiananmen protests isn't lost on those familiar with chinese history; the may 4 movement in 1919 that led to the establishment of the ccp in 1921 was also student-led, only for students ostensibly doing the same thing (fighting for their political ideals) to be brutally shut down 70 years later. lou ye gestures towards the tiananmen massacre without actually really depicting it, leaving a gap in the narrative, its absence glaring. instead, lou ye allows his characters to settle around the gap, alluding to the tangential relation between the traumatic event, the personal relationships between them, and emotional responses they have to their lived experiences.

on the other hand, the story following yuhong-zhouwei-liti got exasperating real quick. i'll buy that a lot of their behaviours and inscrutable/inaccessible personalities result from their experiences and traumas, but i just couldn't understand their motivations for navigating their personal relationships the way they did, even before the student protests. the scenes of yuhong and zhouwei's budding romance upon their first meeting were visually beautiful, but they made me feel a little empty inside, though i have difficulty pinpointing why. watching them interact became an exercise in misery and i wanted the film to end.

there are so many explicit sex scenes in the film where the parties involved are face-to-face, making it even more frustrating and uncomfortable having to watch the same people not communicate with each other outside of their carnal exchanges. or perhaps that was the point? perhaps love and passion in a time when you have everything to lose can only be an all-consuming wound on your heart, or something ephemeral that you have to let go of before it hurts you first.

Ode to My Father