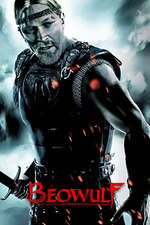 So, like with Polar Express there’s kind of a personal story for me with this one. This is one of the first movie battles I won with my parents. A few years earlier I had lost such a battle with them over the motion picture Van Helsing. I desperately wanted to see that movie. I had never seen any horror films really so I was a bit scared of it but that made me want to see it more and the premise of Hugh Jackman wearing a fedora and fighting all the classic monsters with dual pistols was the friggin coolest thing my 9 year old brain could conceive of. Sadly however, I was unable to convince my parents to take me to that movie probably because they thought it was too scary plus the Dracula’s brides stuff didn’t help.

So fast forward to 2007 and I desperately want to see the movie Beowulf. My dad is very reluctant to take me and my brothers because of all the naked Angelina Jolie in the marketing. He thinks it’s probably too adult. Me and my older brother constantly try to convince him to let us see it but he won’t budge. We don’t manage to see it in first run theaters. But then...a couple months later, we’re visiting my aunt and uncle and it’s between going to see Beowulf and another movie we all had already seen. So he finally gives in and I get to see Beowulf one night  in a packed dollar show screening in Phoenix, Arizona. The movie was awesome. It was a most triumphant and glorious night.

And then I never watched this movie again, save for watching the first couple minutes on Netflix one time and thinking the visuals didn’t hold up. And then this movie just kind of diminished in my mind over time and I assumed it couldn’t be good and it was just being 12 that made me enjoy this movie. But I’ve finally rewatched it now and...I still think it’s kind of rad.

First of all there’s a definite and vast improvement in the mo-cap technology here compared to Polar Express. The eyes are still a little lifeless but the faces are much more expressive and Zemeckis directs the scenes with a lot of kinetic energy and camera movements so that distracts from the remaining limitations of the technology. The visuals and general still hold up pretty well in my opinion. The faces aren’t quite as lifelike as in most PS4 games I guess, but the film still has a distinct and cool visual style. I would say it still looks better than most video games because it’s directed by Robert Zemeckis and the cinematography is pretty incredible. Also considering this movie came out in 2007, the very early days of PS3, it looks amazing for the time.

The actors also do a great job of bringing the story to life. I would say this film is perfectly cast in that every character is played by the best possible actor for that role. The slimy advisor is John Malkovich: perfect. The quietly sad queen is Robin Wright: perfect. Anthony Hopkins gives one of his most energetic performances of the last 20 years as King Hrothgar and he is also perfect. Ray Winstone is great too as the titular character and he seems an interesting choice as in real life he doesn’t exactly look like a Beowfulf-type classic hero character. But I guess that’s one of the cool things about this technology, that you can cast a great actor who doesn’t necessarily have the right look for the traditional leading man. He brings a extraordinary amount of gravitas to the role that most young, ripped actors wouldn’t be able to. And finally I want to mention Brendan Gleeson who totally crushes. Man if you can get that guy. The one time I get bummed about the mo cap is Gleeson’s monologue at the end because his delivery is so powerful and the weird blank eyes hold it back just a little bit.

The third thing that I think is really good about this movie is the screenplay. With Polar Express, Zemeckis clearly didn’t care about the story and just wanted to show off all the stuff he could do with the technology. With Beowulf, he uses the technology to help tell the story and particularly this take on the story. It also might help that he got Neil Gaiman to write this instead of doing it himself. Zemeckis could just focus on making it look cool and Gaiman could worry about the substance of the story. And I think Gaiman did a great job with this. He really gives it a through-line and strong thematic ideas that are not in the original text. The original story of Beowulf is just a series of events. Beowulf kills Grendel. Then he goes and kills Grendel’s mother. Than many years later there’s also a dragon and he fights and kills that too. Gaiman comes up with a smart way to weave these events together into one narrative with the running theme of man’s weakness and the consequences of that weakness. The sins of the father if you will. It gives the story a real weight and and powerful universality.

Also it’s really crazy how horny this movie is. I remembered lust being a major theme but wow it’s pervasive in this. Between that and all the gore, it is absolutely insane that this is PG-13. I guess most of the bloodiest scenes involve creatures being massacred and not people, so maybe that’s the loophole. But there’s humans getting their limbs ripped off and ripped in half that are fairly bloody and very gruesome. I’m really confused who Zemeckis intended this movie for besides 12 year old boys like me at the time because I feel like most adults would turn up their nose at mo cap/animation and it’s way too intense and raunchy for kids. But despite all this, the movie is really good and I like it so I guess that’s what matters.

And one other thought I had: it’s funny that this came out the same year as The Simpsons Movie and they both have the: comedically covering the characters dong with different objects..bit. I know Austin Powers is the original version of that, but those other two scenes are so similar. And it makes sense in The Simpsons because...that’s a comedy while Beowulf is...mostly not. I’m saying the tone is maybe a little bit hard to pin down in this. But somehow that doesn’t detract from the experience for me.