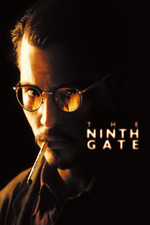 It's not entirely correct of me to review a movie like The Ninth Gate. The combination of being a bit too mainstream and a bit too new should scare me away, but I've always walked the path of underrated movies, movies that just doesn't get the respect they deserve. And then it can happen I'm reviewing a mainstream movie starring Johnny Depp. This is also one of the last time Depp plays a normal character, not that boring, "quirky", colorful off-beat person he's been specializing in the last years. But I guess it's easy making million by sleepwalking through your work?

Corso starts off a little bit like that, someone out of the ordinary, a weird guy - but slowly transforms to just an ordinary, greedy businessman who happens to deal with books. Smart but cunning, cunning but boring. He's not fun. He does what he have to do and that's it. It's his transformation to something else, to an interesting, an passionate person we see during the story. Around him is the oddities, the freaks, the originals: Frank Langella as the obssessed collector, Lena Olin has the slutty greedy widow, Jack Taylor as the sad, violin-playing last-of-his-kind, Barbara Jefford as the one-armed, wheelchair bound old bitch etc. Oh, and Emmanuelle Seigner as the succubus/devil/demon/girl. Compared to them Corso is boring, a nobody.

But deep inside he wants to be somebody. That's the journey we follow.

No one seems to talk about The Ninth Gate nowadays, that's a pity. I'm sure we all can agree on that it's one of Polanski's more lighthearted movies - just like The Fearless Vampire Killers, The Ghost Writer, Frantic and Pirates - but Polanski is always Polanski and he's put a lot of passion into this work. He plays around with conventions, puts a lot of small jokes here and there, cameos from himself and his family. It's a rich movie, filled with details. Every actor is good in it, but I'm a big fan of Jack Taylor and it's so amazing to see him in such a big movie playing such a interesting character. No wonder he's high up in the pre-credits. A masterful actor. Frank Langella is another favorite of mine, and he's one reason to watch it. A perfect performance, edgy and still classic. A professional like few others. By the way, I watched a very fine movie with him the other day, Robot & Frank. Give it a try.

The Ninth Gate is a mystery, that kind of mystery that Dan Brown later made so popular (this movie is based on Arturo Pérez-Reverte's novel Le Club Dumas - not a bad one, but quite different from the film). There's symbols and riddles, ancient books and castles. Oh fuck, I love stuff like this. It triggers my imagination. If I was a rich man I would probably start to collect old books just because I can (and probably grow tired of it quite fast). It's a guided tour through the mysticism of Europe and it's a perfect trip!

And no, it has very little to do with Suspiria and Argento's films - I've heard some people want to read this film as an inofficial part of that series. But no way, this is something completely different. The only similarity is that they're all deal with supernatural stuff and is set in Europe. Nothing else.

The Ninth Gate is worth rediscovering. I'm sure it will be a favorite of those who haven't seen it yet.