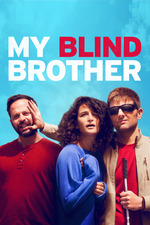 An exceedingly pleasant, cute, apt, extremely slight thing about a bunch of people so mired in their own heads that they can't see how other people view the exact same world they experience otherwise. I admire its willingness to shade every character of major note, not necessarily in shades of grey but to really bring out the whole of them, neither defined by their worst moments or their best. This is probably the best Nick Kroll performance I've seen for it, honestly, his wild horrible abrasive qualities being tempered into a more palatable form, which everyone else effortlessly steps into their roles.

The effortlessness is just as much a weakness as a boon, though, ultimately; I don't know if a more treacly, Sundance-ready indie dramcom this year exists, from every single character and plot beat from beginning to end. What seems like it'd be the clearest inroad to something a little meatier in the comedy, too, gags playing around with how one of the main characters is blind, tend to come off more cutesy than amusing. Still, I would struggle to come up with a group of people I'd rather see make this happen, and together with Goodhart, as much as they can't make it soar, it's coasts through assuredly, teeing her up for what could easily be better things.