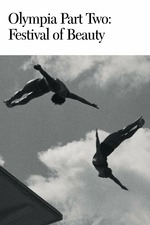 I went through a bit of a whiplash a week or so ago when I remembered these movies existed. I was shown the diving sequence from this half in a film class once upon a time and it's honestly probably among the first times I could identify a piece of filmmaking making me feel a way that was unexpected. I'm no big sports fan, but I do have some love for it, especially when watching with other people who are more into it. This, though, stirred my soul; it's legitimately probably the only isolated clip of a movie I could remember from either of the film classes I've taken. So, being in the year of watching movies from women, it seemed like a great excuse to finally return to that movie which once served as something of a near-muse for me. Then, about three hours after I decided this, I realized: "Okay, now how do I wrap my hands around expecting to like, expecting to love even, a movie from a Nazi propagandist?"

It's a non-problem in the register of things that qualify to be worried about, of course, and it's the height of my privilege that I even get to feel like I have the option to not find it a dehumanizing experience. But it's something I spent time thinking about, and, unintentionally, got to really puzzle all the way through before I ended up watching them. What I came upon is that I would be vigilant, at the very least, and truly look the film in the eye. If it was clear that its merits rested in its propaganda, purely, I'd relate to it in that way, and if I found anything else about it, I'd relate to it in that way, couching it all in these two paragraphs I've thus far written. I guess that's probably as close of a rule of thumb as there is to how one should approach films, anyway, to my view (not to say watching a movie with preconceived notions is bad, but that's how it strikes me personally), but it was worth reminding myself of before I came in.

I come away not only feeling that was worth the thought ahead of time, but much like with Under the Sun feeling that I might just have gotten an entirely different experience than many of the people who've likewise reviewed it on here. That to watch "Olympia, The Olympics Documentary Directed By Nazi Propagandist Leni Riefenstahl" is to come away seeing the Nazi propaganda you thought would be there. I try not to ascribe much to peoples' viewings generally, but reading reviews of this half of the film on here, where each and every one asserts that it's propaganda and nearly every one asserts that it exclusively glorifies Aryan athletes, it seems the unavoidable conclusion to me. Because that's simply not true. In the first half you have the pretty unequivocal domination of Jesse Owens in pretty much everything he does, and in both halves Japanese athletes do some of the best work in nearly every showcased event (before you get there: Japan was not only not an Axis power in 1936 when this was filmed, but neither were they by 1938 when it was shown). Likewise people from the Philipines, from India, show up throughout.

You could argue that they simply have to showcase things as they are, but (if you are likewise arguing it's propaganda), you are definitely trying to have it both ways. To influence the shape and events of a documentary are the pure essence of what documentary filmmaking is. There were more than three and a half hours of Olympics, after all, it's not as if this is all the footage they had, the only stuff they could have included. A version of this film without Jesse Owens could exist (and, going by tell that Hitler was furious about his wins, would be preferred by many Nazis I'd wager), a version without any of the Japanese competitors could exist, a version without anyone but purely Aryan athletes could easily exist (I'm not knowledgeable enough about the distinction, or if there is a meaningful distinction, between the Blond Haired Blue Eyed thing you always hear evoked and other general white folks). There wasn't an internet to fact check Riefenstahl in the 1930s, it couldn't have been easier to Propagandize This.

And, with that, I'm ultimately finally getting where I intended to get with this all, with the little blurb I wrote about the first film. It's a very easy take on this to come at it as something made by a woman who would make quite a lot of filmmaking dedicated to Nazi causes, that that's a complicating force. That is the easy social lens through with which to view this. It's not an invalid one, it's just the overpowering, single-minded one. Reviews on here of the first film, though, commonly cite a righteous joy watching Jesse Owens trounce the Germans. The social context this ignores, though, is to think on what Americans following the Olympics might have thought of Owens being their standout star, the person representing the United States of America on the national stage. An African American man, decades before the heat of the civil rights movement. To wonder if some, maybe even most, Americans watching this movie, following these events, wouldn't have preferred the Nazis win. Representing America in this moment, for as much mythologizing as we've done for our place in this moment in history, was unlikely a particularly noble cause.

I say this not to tear down Olympia, as you could guess from either of the ratings I've given these movies, but to say that a whole lot of murky, weird things went into these Olympics, as would they come out of them. That many lenses will show these events many ways. And that Leni Riefenstahl's brilliance, unlike how I found Under the Sun sorta out of control with its possible ambiguity, is that she's wrestled something into political ambivalence such that those lenses will all alter it equally.

Olympia's best, most brilliant aspects, most fervent passions, aren't political, they're aesthetic. Riefenstahl isn't interested in these people as representatives of their country, something clearer and clearer as the movie goes on, but as representatives of the Human Race, as people at the absolute peak of what they can single-mindedly dedicate their physical forms to achieving. It's not Hitlerian; it's Randian (not exactly something to aspire to, given, but a completely different beast nonetheless). And, like any passionate, wildly talented filmmaker, Reifenstahl can bring every bit of that to the screen. Never has slow-motion footage been so vital, never has each and every Olympic event been treated as a new opportunity to see people achieving the peak of Sporting.

It's in that respect that this half has its clearest leg up on the prior, for my money. One review on this site accuses this movie of more or less being the scraps of what couldn't fit in the first movie, an understandable accusation to be sure, but I would disagree. Where the first movie is a celebration of arms and legs as things which power through these events, all running and jumping and throwing, this movie takes on a broader palette with which to paint. You have those running and throwing events still, of course, but you also have sailing events, diving and swimming, touches of gymnastics, horse riding, team sports. You have fencing, which provides maybe my favorite shot in any documentary, ever, the shot itself in a single image demonstrating what I mean. The fencing segment, short as it is, frames the peak of fencing not as pure strength, but as something of agility and fleet-footedness, something that's a clear revelation purely through the shadow fight this is framed as.

In kind, not only does the increased breadth of subjects bring this to the forefront, but this movie takes on the idea in other respects. Part One is something that almost feels like conventional coverage in some respects, filmed brilliantly but, crucially, every event we start we don't leave until the event has a winner. In Part Two, though, that paradigm shifts (the shifting itself emphasizes it, something that makes me wish I could log these as one film and which is tempting me to regard it as one). Eventually, we less and less get those resolutions, eventually it becomes movie which effortlessly jumps from one event to the next, coming to them in media res and leaving before they resolve. In that way, the movie on the whole more and more leaves behind any emphasis on "winning" you could impose on it. In Part Two, it becomes the showcase of these bodies it was always meant to be (the lone regard in which I prefer the first: I wish this had more women's events to further play into this).

In doing so, it flourishes to every ounce it can. Commentating gets, mostly, more sparse, segments bearing the mark of grandeur I so adored about the first film grow more and more plentiful, both in pure runtime and as a percentage of the whole movie. All of this leads me back to the beginning, of course, back to the diving segment which is one of, if not The, bravura piece of filmmaking in documentary filmmaking. I see it frequently noted how the angles and slow-motion and cutting emphasize the otherworldly flight these divers take on, but something I haven't seen noted, what I would call maybe the most important of them all, is how some of the shots are reversed, making their flight visually literal. It's a daring choice, even by today's standards. It's visually incongruous, bracing and demanding you reframe how you're looking at what you're seeing. It a singular expression, in a single moment, what Riefenstahl sees in these people, and what, by the other side of Olympia, I certainly do in kind.

Olympia Part One: Festival of the Nations