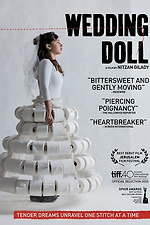 It almost makes me glad I got to Life, Animated before this, because having that in mind clarifies a lot of what I didn't love about that and what I think this, instead, ultimately gets right, as different as the movies are from one another. Here, the protagonist, played Capital L Luminously by Moran Rosenblatt, is entirely aware of how the people in her life treat her with kid gloves, how much or little she doesn't need them, how their fundamental dishonesty with her as a result is what harms her every time. It creates a story of a person who has struggles, not the same ones as everyone else but struggles as anyone else does, but who likewise is given the primary agency in how she shapes her life, who the movie doesn't give us as a figure to pity or utilize for our own uplift, even all the while the world treats her poorly and she's not quite sure how to respond.

It's a drum I don't rarely get to beat, but I would say its biggest misstep is actually in its direction. Shot choices frequently feel inconguous from one to the next, sometimes they insist upon their own stylization. In moments it feels as though the intent is to convey a very singular point of view for Hagit, but when those shots come for other people ultimately, it feels as though it's simply a lot of inappropriate directorial decisions. Chasing down the impulse that this is an ugly world, too, it feels like it ultimately escalates eons beyond what feels tonally appropriate, honestly, a shame as you certainly don't want to feel like its climactic beat is by far its weakest.