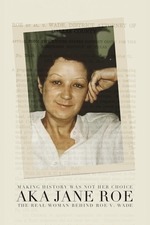 I think a lot of people will go into this documentary and come out with their hopes dashed a little bit. For a multitude of reasons. There are some grim and sad realities here. But I think just as many people will be upset that the documentary isn't about what they anticipated it would be. Because "AKA Jane Roe" isn't really about the supreme court case, nor the abortion debate. It is, as the title would imply, about the woman at the center of it all.

And Norma McCorvey (the AKA'd Roe of the title) is an incredibly complex human at the center of a complicated issue. She, as a narrator and storyteller, is enough to carry this thing on her own, even if you get the sense that she isn't always telling the truth (again, a feeling you get for multiple reasons as the film progresses). But, once again, fact or fiction, she is a fascinating and compelling enough of a lead, with a vital and essential story, that you are willing to go along with it.

The filmmaking itself is competent, if a little reliant on well-trod documentary cliches, and isn't terribly interested in pushing the form anywhere new. In that respect, it can be visually bland and hard to invest in. They are lucky that Norma herself is such a complex character, and that her story, by its very nature, is emotionally and intellectually charged.

A damning piece for the Christian right, who come out looking less Godly than anyone else in the film; people who will lie and manipulate to cover up their own prejudices, and use loud voices and aggression when their lies are brought to light.