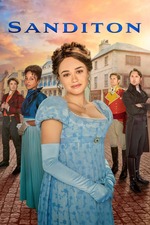 Sidney Parker has ROCKS FOR BRAINS.

This was a fun little binge watch, the ending was VERY upsetting mostly because I know there won’t be a second season.

Some of the characters felt a bit flat to me and I wish some of them had been fleshed out more. I thought Arthur and Mary were a couple until halfway through the show. I think Esther had a really good and complete character arc, she’s one of the few characters to really get one. Charlotte was fine, she was nice! But not particularly interesting, but maybe that’s what made her a good protagonist. She got to learn about Sanditon and a bit about London from an outsiders perspective. I also liked Sidney until the end for obvious reasons. I’m not even going to talk about Tom because I hate him.

This review wasn’t really thought out and maybe I’ll think about it more at some pint and edit this to make it more coherent.