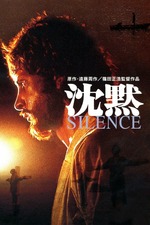 For all the (warranted, in my opinion) praise that the Scorsese adaptation of Endo's novel received, it's a film that focuses on very specific aspects of the work and largely ignores, or chose to sidestep, other important features within the work - much of which can be read in Jon M.'s review. Shinoda is a very different filmmaker than Scorsese (obviously) but it's worth saying that his interpretation of the material, while not vastly different, I think handles the general tone of the novel better. There's writing that discusses how Shinoda was more of a stylist than a filmmaker who concerned himself with any kind of thematic consistency or ideology - which is largely true but also somewhat ignorant of the system he was birthed from and how the trajectory of his career often found him injecting various personal ideas within works of pulp and genre.

Shinoda, working from a script written by Endo, crafts a work that, in my estimation, is a better piece as a whole all the while lacking the strong and/or memorable performance and precise visual language of Scorsese's film. That work is certainly more watchable and enjoyable (for as much as that film can be "enjoyed"). What Shinoda's film captures and what makes it the superior work to me, is it's cultural specificity and it's almost alien tonal qualities. Scorsese's film was focused on the spiritual trails and tribulations of the Portuguese priests coming to Japan, all the while not dealing with their own place as a nation exerting influence over another, mostly unwilling, participants. Shinoda's work deals with this problem almost immediately by placing this firmly within a Japanese lens. There's no prologue showing the priests back in Portugal, on their journey to Japan. In voiceover over still images of a map. We as an audience must deal with the imperialistic notions of a foreign nation attempting to influence another from second one. This was not a work crafted for an audience abroad, or at least not a large one, thus to focus on the survival of a white man/white men do not supercede the suffering of the Japanese peasants who must suffer their own trails of spirituality.

And while Shinoda's visual language has always been strong (just watch works like Pale Flower or Assassination), his approach here was, at the time, far less showy and purposely stylized than any of his prior work would have given indication of him exhibiting. There's an unfussiness to his images here. He isn't precious with shots, though for the betterment of the film as a whole. The drabness (for lack of a better word), allows more than a couple of moments to revel in sheer horror that he would never top.

The moment when Kiko must renounce herself of her faith gives physical heft to the existential/spiritual crisis, manifesting in one of the best scenes of Shinoda's entire career. It's a moment almost completely focusing on the suffering of the peasants and farmers, witnessed by the priest, knowing he is incapable of stopping such torture or standing in the way of it. He will suffer, but never as much as the congregation that was fostered by him and his fellow priests.