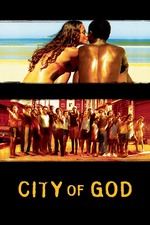 An insane window into the slums of Rio through the lens of short oral story told through film, it ends up being a surprise docu-drama that shows just how endemic the violence in the slums are, and how not getting wrapped up in the violence does mean you van get out. It's a very stylized film that has fun with itself. It's also horribly graphic and dark. It does NOT hold back. The characters were pretty shallow unfortunately, but it was cool seeing them grow up and seeing how the story intertwined.

It's also brilliant how they show you the end, only to rope back so that you don't just see a shoot out and a boy caught in the middle with a camera but EVERYTHING that led to that moment.