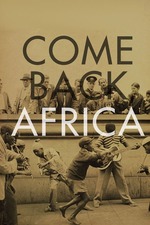 While the use of narrative drama was probably intended to humanize the suffering of these people, its lack of emotional connection and causality leave the drama lifeless and leaves me with only sympathy for Zachariah. I think if they went full on documentary with this it could have had a much more powerful and stronger punch to it. The power of this film only comes from the knowledge that these are all real people, who. After the camera stopped rolling, went back to their oppressed lives. It could have better shown the degree to which Capitalism has replaced slavery as a means of oppression. The example of equating the freedom for oppressed peoples with Communism was especially poignant, but of course it is wrapped in this bad, pointless story, which blunts its power.

The problem with all of the characters are that I don't know hoe truthful they are. Are they representations of people Rogosin has seen or met, are they projections of his beliefs about South Africans and their struggles, or are they show ins for his own ideas about life and the world he sees. I don't know because the reality of the film is muddled by this quasi-fiction/non-fiction story.

The editing in this film is very well done, and the use of drums over crowds of black people rushing in to the city was very powerful. The pacing is very slow, especially during the narrative portions of the film.

The music is the highlight of the film, and all of the music pieces were beautiful moving pieces that accompanied by certain images told an amazing story of the class and race conflict in South Africa at the time.