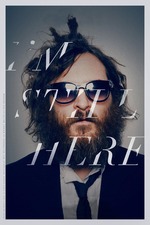 'I pretended to be an arrogant psychopathic asshole for a year and all I got was this lousy film', is hopefully something that went through Joaquin's head when watching the finished cut. Essentially an incredible demo reel of Joaquin's acting ability, but a demo reel in which he assaults people, is manipulative and verbal abusive to the people around him (some of whom I am assuming don't know this is fake), and is generally just a piece of shit. This could work, if only it had any fucking point. Great, Joaquin has the kind of fame and power to do all this garbage and still be fine. But the most poignant thing this movie says is from a TV news report that ends a listing of questions about what Joaquin will do next with, "most importantly, who cares". This film does absolutely nothing to confront or even acknowledge that question, instead revelling the antics Joaquin gets up to and the clearly fake interactions within his inner circle (that shitting scene was so fake and so sad). Watching this in 2020 where Joaquin has once again enjoyed critical and audience acclaim for almost a decade since this stunt, it really seems like this whole thing was a juvenile demo reel in which he disrespects professions and people who actually put meaning and purpose into their work and their lives, as well as actually abuse his power, fame, trust, and put people in danger. This film could have had a purpose, but just from watching it I get the sense that Joaquin and Casey were just like, "wouldn't it be so cool if I quit acting, became a rapper, and you record how everyone reacts lol". It really feels so unplanned in the worst way, as compared to the social critiques in mockumentaries by Sasha Baron Cohen. I honestly hope that at some point after this film was shot, Joaquin realized how utterly pointless and juvenile this all was. And that overly long ending where Joaquin walks around in a swamp with sappy violins as the score, to the point where I realized the film actually wanted me to take this seriously. This movie is the same as those awful youtube prank channels that would fake shit, put their kids in danger, grope women, and generally harass people, but it's okay, "it's just a prank, bro".

Just read the wikipedia page and, yeah, even Joaquin and Casey don't know what the fuck they wanted this to be about. You want to explore the concept of celebrity. What does that fucking mean? Celebrity is an incredibly broad cultural concept. But discussing the intent behind this film is pointless when the film shows no exploration of what a celebrity is or means in the text of the film at all. I'm still placing bets on this being a poorly planned mockumentary that blew up in these kids faces.