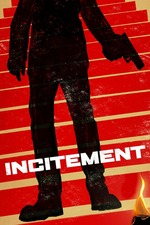 *DISCLAIMER: I would put spoiler warning up but this movie is about a historical event, so I'm not gonna.

A really great docu-drama that is laser focused (wink wink to anyone who's seen the film or has read through this entire review) in showing how this toxic, politically charged environment can 'incite' an assassination by a devout Jew. It is very much a political film but after a Q&A with the director it was clear that while he has very clear views on this event he took strains to depict this character and this world with the greatest accuracy. The right wing fanaticism of Bibi's Lukid party and its ultra religious but morally bankrupt base is depicted in such a way that it was destined to mold someone into a hitman, as it did with Goldstein towards the beginning of the film. How the father perfectly deconstructed the son's ideology by saying that he uses the Jewish texts to justify fanaticism and cruelty, which runs parallel to the same insidious problems within the American Republican Party, although not using the Jewish texts.

I love that this movie shines a light on a moment that changed Israel's future forever, but I was surprised to learn is quietly brushed aside under Netanyahu's government.

I loved the choice of a 4:3 aspect and ratio and how the film always directly followed Yigal (besides archival footage). The audience followed him and I saw what he saw, but I never felt connected to him, there was always a layer of separation. I thought they tied the major political events and Yigal's life together well too.

I did find issues with how on the nose it was. There was mention early on about how he has one target that he focuses on with laser precision, which really threw me off. In this movie it's hard to go into it not knowing that he is going to be an assassin. There were a few other instances as well.