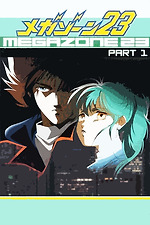 I have NEVER seen one of these hero saves the day "stories" in which right when the hero finally understands the evil plan and only has hours to take on the villain and save the day, he goes and has sex with his love interest and only when his friend is killed like a day later he finally tries to save the day out of revenge once it's too late and then fails at that and then the movie just ends! I've heard this was supposed to be a series but then was cut short or something... whatever its history, taking the movie as a 88 minute complete story (and first part) it just collapsed under its paper thin plot and undeveloped characters.

However, the animation is excellent, and I'm a sucker for that mid-80s anime aesthetic (that's why I even watched this). There is a lot aesthetically wise that Akira later stole (and did much better) (this movie did the power slide before Akira!) And plot wise that The Matrix of all movies later stole (this movie did almost the exact same simulation thing except it's in space and the rules of the simulation were made a lot clearer in this) (the Wachowski's also DIRECTLY stole the line in this where they said the 80s was chosen for the simulation because it was the time of greatest peace and prosperity but just replaced it with 90s).

The women in the film were mostly objects-of-sexual-desire but they did have a few paper thin scenes in which the basics of their character were dumped on the audience with exposition and Tomomi did move the plot along with her death (which is super cheap but so is making your female characters objects-of-sexual-desire). The male lead had even less developement but at least had agency (the dude was literally given the save me Obi-Wan-schtick and he went nah the worlds ending gotta get me that blue-haired anime pussy🤦🏻‍♂️).