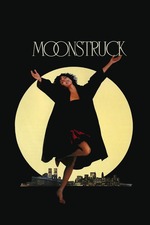 Easily the third most Italian movie after The Godfather Saga. Like, SO Italian. To the extent that almost every character is just adorable, or Nicholas Cage. It doesn't hurt that it stars the extremely gorgeous Cher and Nick Cage, who plays a great Nick Cage in this movie. It's also a really funny rom-com.

Unfortunately, the whole movie feels contrived, and a little slow. This has to do with the beginning of the movie, and the scene where Cage and Cher meet in person. This, without a doubt, an incredibly Nick Cage scene, within the span of 5 minutes throwing bread on the floor, threatening to kill himself, and then calmly inviting Cher up to his apartment. It hilarious, wacky, and so Nick Cage, but it was stupid. It didn't feel like it belonged whatsoever in THIS movie. Later on in the scene, Cage suddenly pulls Cher in for a deep passionate kiss. Cher I think pulls back once before going back into it and eventually sleeping with him. The problem is nothing in the scene, from Cage and Cher's attitude, demeanor, and actions made it seem like they had ANY chemistry whatsoever.

Beyond that the movie is fine, it's fun and cute, and yeah, Cher and Nick Cage were in a movie and this about what I would expect from it (theme and tone-wise). It could've been a whole lot better but again with a formula of funny scenes, adorable characters, and fucking Cher and Nick Cage(!), it would hard to make this movie an unenjoyable experience.