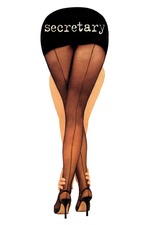 I will say also the pacing was great, I was really surprised by how fast the film went. Maybe thats also because I've been watching a lot of slower more languid films lately. Some of the narrative beats were a little arbitrary but it never felt distracting to the overall experience.

I liked the ending but it was an extreme fantasy. For one, their relationship is still extremely toxic and will likely end badly and shouldn't have even gone on for how long it did (or there should have been a reconciliation where Lee asserts that she is aware of his past coercion and still loves him in spite of it, or that Grey shows Lee how he manipulated her and she still believes she loves him. The fact that the lack of consent was not gone into shows the lack of knowledge of both the writer and director on consent, which is a little surprising given how well the psychology of the characters is portrayed. It was a huge missed opportunity, but one that is uncommon in portrayal of BDSM in motion pictures.

Also also its really funny that both the writer and director went on to make trash after this. Like neither of them knew what they were doing and somehow they made something actually decent.