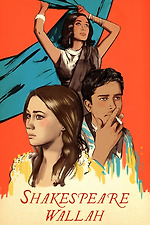 Everything is different when you belong to a place, when it's yours.

Unintentionally the best (and only good) line of this film.

A series of poorly acted and written boring situations that depict India in the 60s from a white British perspective, for 2 straight hours. That's it. If you are interested in seeing that, be my guest.

It does have two hot leads in the form of Shashi Kapoor and Felicity Kendal. Kapoor's role is ironic since the film is sympathetic to white people and see the decline of the interest in Shakespearen theater and white power in a free India with the replacement of these things with Bollywood as a bad thing, yet he is a Bollywood star!

Also, I was surprised this was shot by Subrata Mitra, considering the cinematography was generally quite plain. Although his use of reflections and dust was neat.