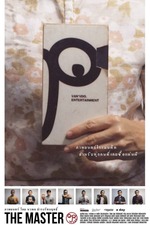 An interesting historical document that is unfortunately very flat in its delivery. Reminded me a lot of Shirkers with its nonexistent main character, but I found it disappointing that they seem to hype up the audience with a reveal that they have a picture of or they found Mr. Van, the latter especially in the last shot. They must have had a photo since he got arrested right? Idk but I think they should have tried to track Mr. Van down more. Because as much as this was an exploration of this era in Thai cinema through the impact this one shop had, there main story is of Van Vdo. But going back to the flatness of the delivery, I will criticize a few specific aspects. The soundtrack was the most repetitive stock documentary soundtrack, and when they used historic video or pictures they did use any foley to immerse the audience in it. And the times they did use video or audio it was few and far between. Maybe they really had very little to work with, but I think the video of the talking heads took up way too much of the film. The entire film felt a little rushed and not paced that well. It was okay but I think it could have used a couple more cuts. Again as I said as a historical document this film is wonderful, which is why its unfortunate that the cinematic aspects of it around it are really unoriginal and engaging.

Also it was interesting how everyone interviewed were men, it has made me think that Van Vdo and the Thai indie filmmaking scene is very male dominated.